PLEASE NOTE:
All the birds and animals and reptiles listed below were observed and photographed
on our four acres of land located 25 miles West of Tucson, Arizona
at Solar Haven

Colorado River Toad
("Boris" is the biggest, fattest "frog" around - comes into the house in the evening
to dine on the many bugs attracted by our lamps - swims in all our rain buckets) 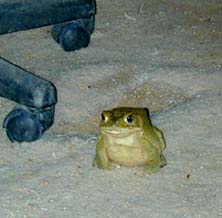 Coach Whip Snake
("Charlie" is all black, seven feet long and fast -- non-poisonous,
known by the locals as a "black racer") 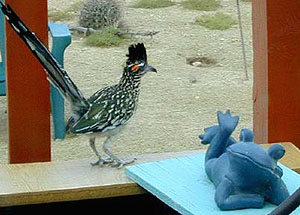 Pocket Mouse and Kangaroo Rat
(both species have remarkable tails twice as long as their bodies
with a large tuft of fur right at the tip, not surprisingly since they bound about
like Kangaroos, we have named them "Boing-Boing"s) 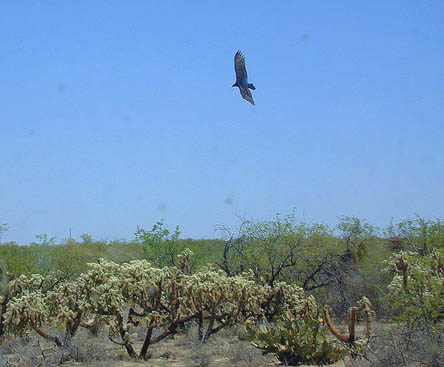 Collared Peccary or Javelina
(a wild boar but not a pig by any name, very shy and not often seen, but can be
heard snuffling and snorting back in the bushes at times)

Zebra-tailed Lizard
(very common, they pump their heads up and down as if nodding
in enthusiastic agreement  Mindy likes to talk to them:
"Lizzie, lizzie on the sand,
Am I the fairest in the land?") 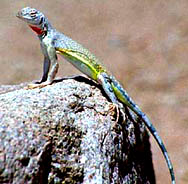 Western Diamondback Rattlesnake
(an awesome sight, "Ghengus" lives somewhere quite near the house,
after nearly stepping on him a few times, we called the Fire Department who
came and caught him and relocated him elsewhere)

Gambel's Quail
(very common and amazingly tame, they scratch for their food like chickens,
large covies with as many as a dozen chicks running along behind Mom and Dad)

Brown Towhee
(small and personable little fellows wearing a stylish brown cap -
walking right up to you, they give you a cheery CHEEP and stay to chat for awhile -
remarkably intelligent and can find their way back OUT of our greenhouse after stopping
to dine on bugs living in the bales of straw stored there - other birds panic once inside
and bash themselves often to death against the walls trying to find a way out) 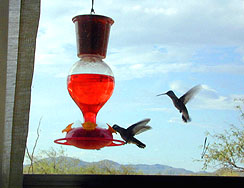 Coyote
(we have almost nightly concerts, one, two, or even three packs yipping and howling and
yammering from different directions at the same time, often very close to the house -
our St. Bernard chases them away if they cross the line where he has marked, the
coyotes take off quickly but then stand on the other side of the line
and bark and yip at Homer in frustration)
- a Coyote pack, click to listen -

Antelope Ground Squirrel
("Morris" and his very large family has a burrow close to the house,
and we see them scampering about most of the day) 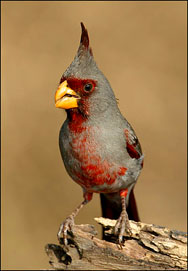 Pyrrhuloxia
(a member of the cardinal family,
native to the desert,
not only is he Mr. Handsome
but when in love,
or wanting to be,
his voice is exquisite)

(We found this little fellow trapped in some concrete blocks
in the foundation of our new house while it was under construction.
Neither siblings or his mother were anywhere around. Mindy fed him goats milk
from a tiny bottle every three hours. He has grown up to be big bunny now,
but would probably not have the skills to survive if he were released.)

INSECTS:
(bunches of bugs, big bugs, an absolutely fascinating
variety -- over 13,000 species of insects have been
identified which are found only in Arizona -
Palo Verde Beetle at left)

Scorpion - too fast to get a picture of yet

(slower, lots of feet to get coordinated)

Pack Rat or Wood Rat
(big fellows, trying to get in our tools and building materials and make off with them,
we don't argue anymore about which one of us lost something,
we have a pretty good idea where it went) 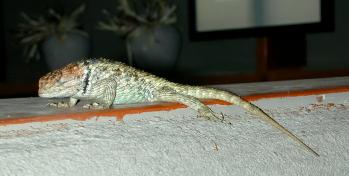 Cactus Wren
(the Arizona State Bird, real personality but a song bird he is not)
- listen- 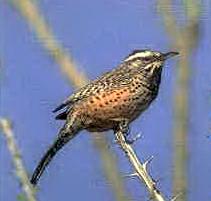 Phainopepla
(known as a "silky flycatcher" and found only in the Sonoran Desert,
all black with a small crest like a Cardinal and very handsome)

Gila Monster
("Frankie" lumbers slowly, very slowly across our back yard, showing no signs of
yielding to anyone or anything, not agressive, but WOW what self-confidence - he would
have walked right over my foot, I believe, had I not made the decision to remove it) 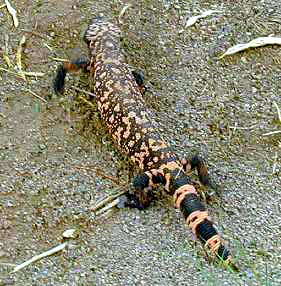 Purple Martin
(striking shiny deep color with the voice of a babbling brook,
like no other in the bird kingdom)

This page copyright by Jim Phypers, 2002